If you ask nearly any woman, she can describe for you how she believes she is “supposed” to look. This isn’t to say that there aren’t variations (especially, historical and ethnic variations) on this theme. Young women will include a big booty in their cultural ideals while we middle-aged women think less about their behinds (aside from hoping to avoid too much sag). But most women will tell you that their ideal is relatively thin, relatively toned, and somewhat busty and curvy.

Most women will also tell you that they are not meeting their ideal. In some of our (CM’s) research, 90% of women indicate dissatisfaction with their appearance. This seems to suggest that the metric they are using to evaluate themselves may be a bit too stringent, right? But is body dissatisfaction the only possible outcome when women realize that they don’t look the way they have been socialized to believe they should?

Other consequences include disordered eating, depression, anxiety, and social withdrawal.  These are real, serious concerns for many women, and not superficial problems easily alleviated. They are deeply embedded in a culture that presents female standards of beauty that are both narrow and mostly beyond our control. Recent research suggests that the ideal of thinness isn’t likely to be attainable for everyone. Biology, genetics, epigenetics, childhood trauma, and our individual microbiomes all influence metabolism and overall weight. Women may be distraught by cultural messages indicating that they are too skinny or not skinny enough and yet a significant portion of that may be hardwired. Unattainable standards can be crushing, especially for young girls looking to the world around them for guidance as they develop into their adult selves. 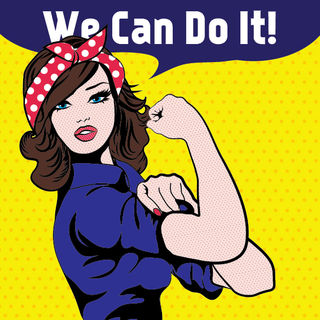 At some point, we both realized that we were never going to meet these ideals. This is noteworthy because we had been socialized in different families, in different cities, among a variety of different experiences, to believe that our worth was linked to our appearances. The path toward this realization was not the same for each of us.

One of us (LS), can remember a moment in fourth grade that was an epiphany: Christie Brinkley was everywhere at the time, and when LS compared herself to this exemplar she knew that her value would never be found in being tall, skinny, and especially not blonde. This evolved into the liberating realization that she was going to have to focus on other strengths: doing well in school, athletics, and striving toward her long-term goals. These realizations led to a lifelong commitment to equality, a Ph.D. in psychology, and a successful career and family life (including a very egalitarian 20-year marriage).

Deciding to push back – or simply reject – the beauty ideals that surround us is not easy, but it is something young people may be better positioned to do if they look to the growing number of body-positivity examples popping up on social media and celebrity culture (See Lizzo, Ronda Rousey, and Serena Williams, to name a few.)

The body positivity movement is buoyed, in part, by a focus on female strength. One woman we interviewed while working on this post, Allison, described how weightlifting helped her alter her views of herself and female beauty in general. She said, “After a few months of lifting I realized how good it made me look and feel….For the first time in my life I not only looked strong, but felt strong too. My life became less about diet and exercise and more about eating and training.” By focusing on health and functional fitness, Allison was able to push back against the female beauty ideals she was used to accepting and now endeavors to be an ambassador for other women looking to improve their own health and physical strength. She told us, “I looked up to other women who lift when I first started, so it is my duty to teach other women to strive for strength, not skinny.”

Another woman we spoke with, Jess, began working out at a CrossFit gym seven years ago and talked about how it changed her perspective about her body. “People who do CrossFit don’t care about how slow you are, how out of shape you may be, or if you are the one who is finishing first; they just care if you’re putting forth your best effort possible.” She found this environment helpful in rethinking her approach to her health as well; she wanted to exercise to feel well and to be able to accomplish physical feats, like climbing a 10,000 foot mountain, a goal she recently met.

This isn’t to say that a focus on fitness is a panacea for body dissatisfaction. In fact, some research suggests that fitness goals can be as problematic as appearance goals – unless people also lose the appearance goals. In other words, exercising to lose weight is unlikely to improve body image. Exercising to feel strong and to be able to meet physical goals appears to be much more adaptive. 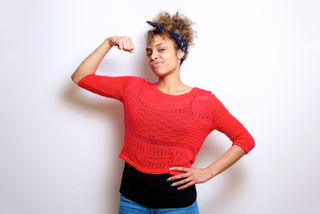 This has been supported by other research that found thinking about how our bodies function or our “functionality” can improve positive body image. By placing less value on physical appearance and more on physical ability, it many be possible to also reduce the body surveillance and self-objectification common among girls and women. Some body-image researchers have even called this approach an act of “proactive resistance” (Tylka & Wood-Barkalow) in a damaging, appearance-focused culture. It seems so simple, yet it can be difficult to focus more on what our bodies do and less on how they look.

One of us (CM) gave up on unrealistic beauty ideals gradually across early adulthood. At some point, the realization that people valued her for her mind at least as much as her appearance felt empowering. As did the sorts of things her body was able to do: have two children, run long races, and meet the banal commitments of day-to-day life. But, it was really in studying body image that her identity formed as someone who did not want to be a pawn in an oppressive culture.

We all have a choice: We can accept beauty ideals or resist them. By resisting, we’ll be working toward changing them.

Lorie Sousa earned a Masters in Counseling Psychology and a PhD in Social and Personality Psychology. She has worked as an analyst, a statistical consultant, owner of an educational research consulting company, and as a contributing faculty member and has been involved in qualitative and quantitative research for more than 20 years. (coreducational.com)

ABOUT US
CelebrityHush is your news, entertainment, music & fashion website. We provide you with the latest news and videos straight from the entertainment industry.
Contact us: info@celebrityhush.com
FOLLOW US
© Copyright 2018 - CelebrityHush
MORE STORIES